I was given a cot panel with a cute pair of Clown Dolls on it that needed to be finished for Mum to take to Santa's Workshop. 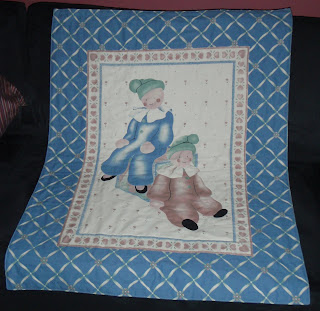 ﻿
I originally planned to use flannelette batting, polycotton backing and binding. After talking to the lovely lady at Textile Traders, she suggested to just bag it out. Brilliant idea!!! Since the panel already looked like it had a border on it, I wouldn't have to find a matching binding fabric! Love it!!
So..
I bought a piece of flannelette big enough for the whole piece, washed it ('cause there is nothing worse than flannelette shrinking AFTER it has been used as batting!!) then ironed it flat. LOADS of pins and cut to fit.
I actually attached the backing to the floor with masking tape Right Side up, then placed the TOP printed fabric Right Side DOWN on top of that, then the flannelette on top of that. Loads more pins and off to the machine!!
Stitched all the way around, leaving a gap for turning along one side, trim the sides and corners and turn. Don't forget to remove the pins!!! 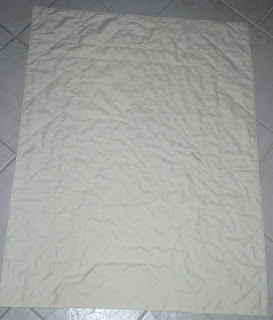 ﻿
Iron all around, making sure the lining isn't poking out to the front and add back some of the pins.
Finally, I ran around the edge with a topstitch, and started the quilting...
I kept the quilting pretty simple - just followed the main design printed on the front, and added some "circles" in the backgoung part around the printed circles. I used the letter "O" function on my machine, stretched it to make it rounder and made it do one only at a time, so all I had to do was line up the dot and put my foot down. Easy as that!
I also tied and pulled all the threads inside. Its a fiddly job, but worth it.
Voila!! One finished cot quilt!!﻿
Posted by DanaStuff at 8:22 am

Should I talk about myself? Who I am and what I stand for? What this blog is all about????

It's all about sharing... I want to document my ideas, my projects (past and present), my future plans, what I've seen, what I think and look to you all for feedback on how to improve, what should change, good and bad - criticism is a great tool! But please make it constructive!!

I'm not planning to be a regular blogger. Rather, just post when the mood hits, and maybe document some of my stuff for posterity! What interests me varies from day to day, hour to hour, so expect the unexpected!

I hope to inspire and be inspired.

Stay tuned for more "stuff" soon!
Posted by DanaStuff at 10:51 am