Nutcracker, with a twist....

So, this other Nutcracker is a little darker, so his tunic needed to be a different colour. Not so bold and bright, more muted and winter-y. I found that orange and brown worked with his skin tone. As it happened I found a lot of these colours in my stash, including some fringe, which is a bit more pink but seems to work ok.
I also made his arms thinner, as the thicker wood plus the felt made them too fat. Still need to attach the legs, but here he is all mocked up....

As luck would have it, his hat is already the right colour, so no need to paint it. Need to spray his hands to match his head and glue all the bits on, but he should be done by the end of the weekend.
Then on to the yellow one! ;) He is pretty much ready - he has been sitting like this for a while now, and I quite like it! I have run out of wood for his arms, though, so I need a quick trip to the hardware store..... Who am I kidding? It's never "quick"!! ;)

Update 28/9
I knocked off his nose and tore off some of his face paint. When will I learn?? :(
So, I had to strip back the colour back to nothing, but I only went as far as where the hair would be. I then reprimed and repainted it. Since it was already attached to the body (which was already completed) I had to tape it up really well to prevent overspray.
It's not too bad, but I have had to redo his face completely, so he looks a little different, but overall he is the same. Legs are done, too. I think I will leave them plain black.....

Update 2/10
He is done! I quite like this colour way, as it's a bit more neutral and exotic looking..... 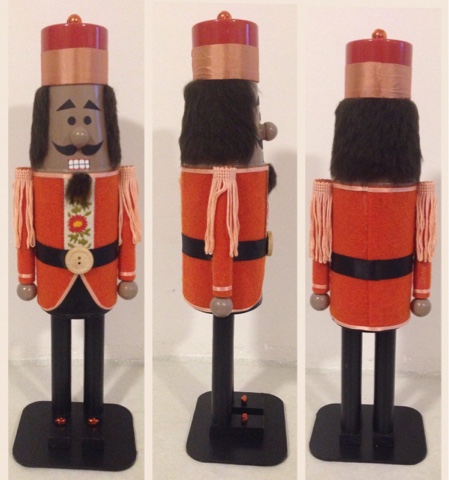 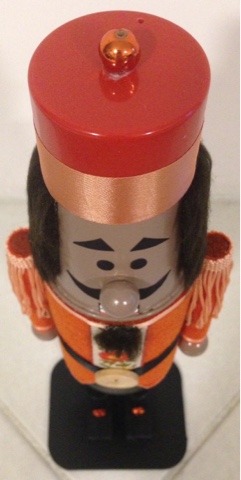 Posted by DanaStuff at 7:44 am

Aren't they looking good as a trio? 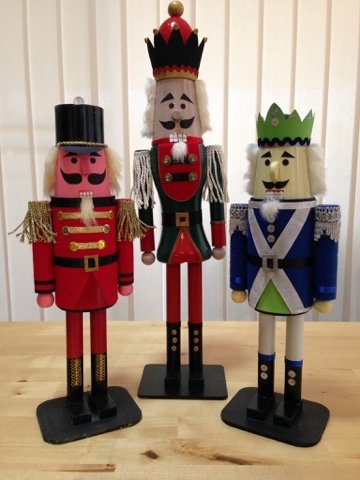 I think I know what everyone is getting for Christmas! ;) 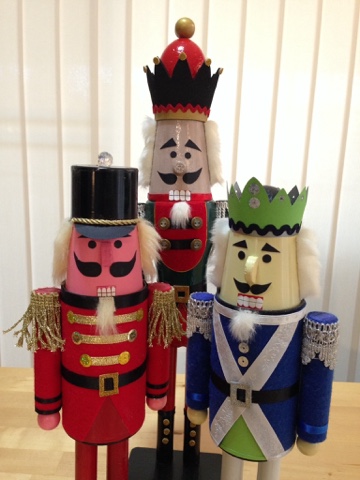 I still have two in progress, so best get back to it! :) As you can see, I did end up adding his little beard. He looked a little unfinished without it...... 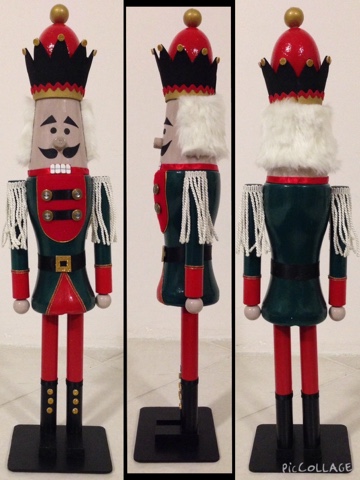 Posted by DanaStuff at 6:59 pm

I have been experimenting with a new type of coffee tin, since my other type has been discontinued. Mind you, I have enough to last FOREVER!! ;)
These ones are shaped like they have a little waist on them, and as luck would have it, fit the same plastic cup for the head as the other ones... Perfect! 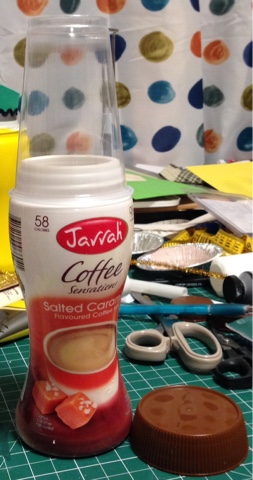 The only significant change is that, as it's not straight sided, I need to paint it. There is no chance I can use felt to cover it with that amount of curvature, so I need a rethink on the body design. It's also slightly larger than the other ones, but not by much.
Once the label is removed, you can tell that the plastic is going to need an undercoat. This time I decided to try a brush, rather than the spray paint. I bought a small tin of paint specifically designed for plastics, and some small rollers. The roller was difficult to manoeuvre over the curves, so I used a large brush. Left to dry, it wasn't too bad.
Then, on to the paints! I have a BUNCH of acrylics in random colours, so I picked a green and a yellow to experiment with. The acrylic needs at least 3 coats to make it solid, or it's a little streaky. I used the same method on the cup, and mixed up some custom skin tone. A couple of coats, turned out not too bad ;)
So anyway, here is where I am at. I need more dowel for his arms, and painting, but so far so good. They all still need to be top coated, but I will do that once I have the arms and legs painted as well...

I have some gold buttons, which I will stitch on before I glue on the bib. Not sure if it will go on the green or the yellow body, yet.....
Update 13/9
So, I tried to add some colour at the bottom of the shirt, below the belt part. I used some tape to mark some lines, and when I pulled it off, so came the paint! Oops!! So, started again from scratch.
This time, I planned the colour change before I painted the green. I found that trying to paint the red over the green was not going to give me a vibrant colour, anyway. So, I marked the level of the belt, and pencilled in the lines, and just painted it all again.
Several coats of paint later, and I think I'm finally ready for the sealer!

Update 21/9
He is all sealed, but I think I used the wrong type of sealer ;( It took FOREVER to dry, and even now is a little sticky to touch. Oh, well, he's just a tester, so I will only used Mod Podge from now on. I only have matte finish, but this will have to do, for now...
Finally got him fully assembled, to see how he looks. I'm pretty pleased!

Still need to finish his legs and need to sort out his hat, but overall progress is good :)
Update 22/9
He is done!! Learned a lot about paint, sealer and glue with this one. Not sure if I want to add a beard - so far I'm ok with it, but can always add it later.....
Still have the yellow one to go, but, I have some ideas brewing ;)

The gold circles are from foam and a hole punch ;) His hat is craft foam, partially painted with ricrac glued on. The dome is a styrofoam egg, trimmed at the bottom, couple of coats of paint and sealer. The top ball is a plastic ball painted in gold. 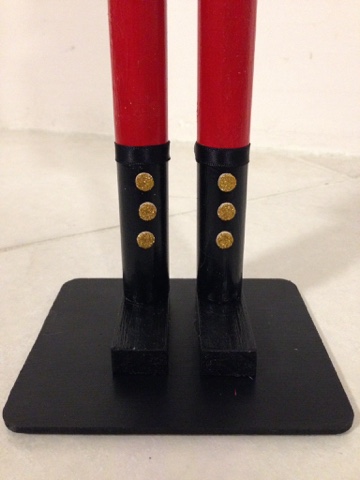 Posted by DanaStuff at 8:08 am

Ages ago I talked about doing something with those pre printed placemats that I found, and I finally got around to doing something with them.
A bag!
But not just any bag.... A zippered bag! I remember making one of these when I was at TAFE - I even found my original sample (which proves I never ever throw out ANYTHING!) 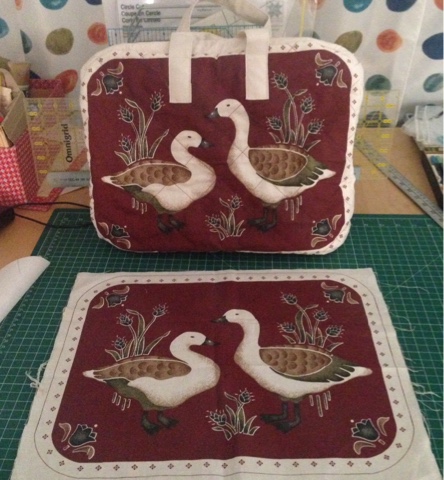 Since I wasn't working from a pattern, I had to make my own templates. For the sides, I went a little longer than I thought, so I could make any adjustments later on. I also chose to quilt the fronts in a cross hatch pattern, which I reflected on the sides and top. After doing the quilting, it sat for quite a while, as it wasn't working for me..... It needed more structure, more stiffness, to hold its shape better. I found some heavy vilene in my stash, and used some appliqué paper to stick the two together. I used some iron on vilene for the sides as well, sticking it to the back of the batting before quilting it. Should have done this for the front/back also, but it didn't make too much difference once it was done.... 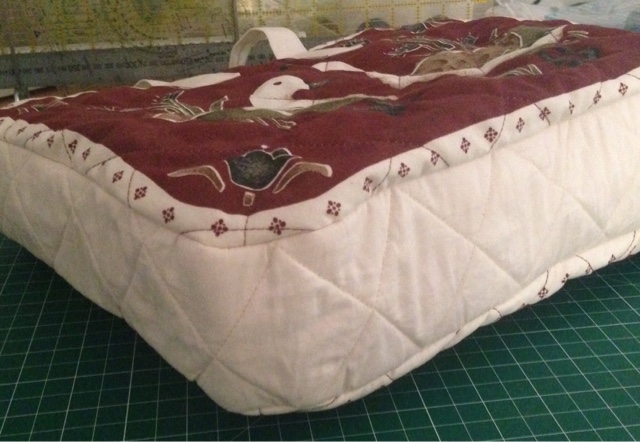 I made it quite narrow (8cm wide finished) but it is still huge inside! I lined it with some rubber backed curtain off cuts, which also help it keep its shape. And the zip and all the fabric is also recycled from my stash, which is a plus! ;) 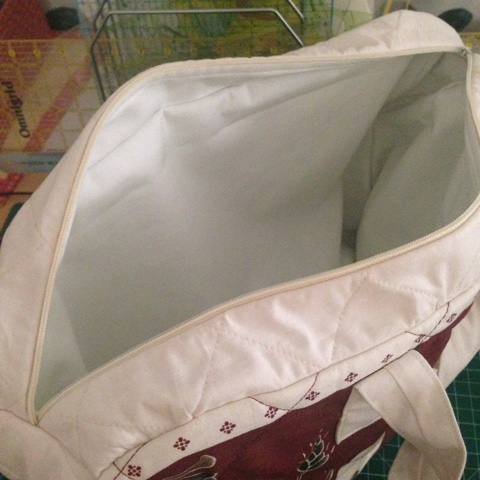 It's definitely not show quality, but still a useful tote bag, made completely from my stash. No idea what to do with the third panel - maybe another bag, but more on the simple side? We will have to see what happens down the track.... 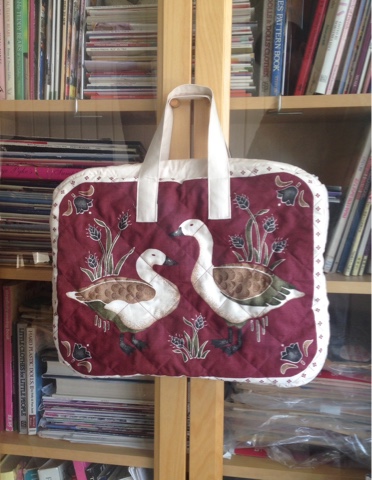