I thought I whould document my latest Coke bottle mannequin, although the process is kinda make-it-up-as-you-go-along. It not really a tutorial, more of guide..... ;) 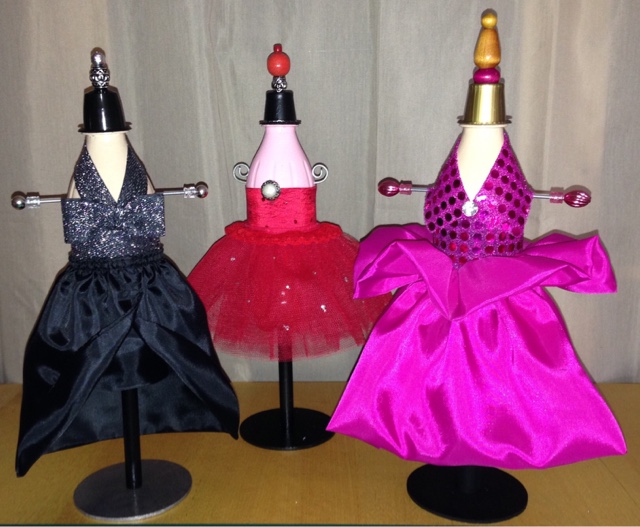 Firstly, gather your items. These may change over the course of the build ;) I can't give exact sizes, either, as each is a personal preference, and will vary depending on the items available to you.
390ml Coke bottle - label removed
Dowel pieces - large to use as a plug, smaller for the stand
MDF coaster
Bamboo skewer - thicker style
Wire coat hanger
Fabric scraps
Coffee pod
Paint
Assorted beads
Screw
Drill
Wire cutters
Glue 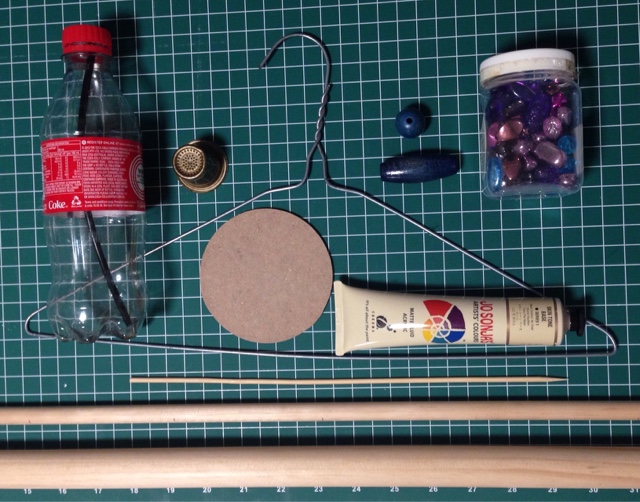 First thing I did was drill a hole in the base of the bottle, big enough to fit the skewer fairly tightly. Also, drill the holes in the side for the arms. The height is up to you, but mine is slightly above the level of the label, at the join in the bottle.
Cut off the top of the bottle down to the lip. This is only needed to give room for the top to fit. If the lid is big enough, it may not be needed.
Next, paint! I put an undercoat especially designed to help the paint stick to the plastic, then put the colour over the top. A couple of coats of colour, then a topcoat of Mod Podge (I used gloss, but matte would be fine). I only painted the areas that are going to be exposed, but that is a personal choice. At this point, I also cut the dowel to fit as a plug in the top. The piece I had was slightly too small, but a bead of glue from the hot glue gun fixed that. Drill a hole in the centre of this piece with the same bit as the bottle, so the skewer fits through it.
While the paint is drying, you can put the hole in the coaster. Find the centre, and depending on the size of the screw, drill a hole to fit. The screw should be the type with the flat top. I used a bigger drill bit to counter sink the screw head underneath, so it's not too wobbly. This will be covered with felt at the end. I also cut my smaller dowel at 10cm, but again, it can be whatever you choose.
Drill a hole into the end of the dowel the right size for the screw. My screw was fairly long, so the hole had to be long enough to fit. In the other end of the dowel, drill a hole slightly bigger than the dowel, so it fits snug. It needs to be long enough to make it secure - at least 5cm deep.
I also used some wire cutters to cut a length of the wire hanger, from one of the the straight sides. Mine was 13cm long, but could be longer or shorter, whatever you like. No rules, right??
At this point, you can mock up the bits. You can see how mine looked below:

Now comes the fun part! Experimenting with fabric!! I decided to keep up the sparkly fabric theme, but this one was very thin. I fused some vilene onto the back, and cut a strip long and wide enough to fit around where the label once was. I cut a second piece the same size for the strap. I just played with it until I was happy with the result. The leftovers turned into the bow on the front. On the pink dress, there is more of a collar effect, while this one is more of a halter top. This was attached first, trimmed, then the bodice part went on top. I used a sticky PVA glue that dried clear. The bow was added much later, after auditioning all sorts of buttons, beads and bits, but the bow worked the best ;)
The skirt was just a random sized piece of lining, squared up, folded in half and pressed. It was a bit blah, so I curved the ends and turned right side out. Much better! I joined it at the top, turned it over and run some gathering stitches around the top. Try around the bottle and tie off at the right tightness (is that even a real word?). After testing this, it was still a bit boring, so I pinned the curves back with a couple of stitches, and put a straight "skirt" underneath. Better.... It's all trial and error, remember?
More PVA glue, stick it down, and on to the next part - the arms!
Choose the beads you want on the end of the wire. The ones I liked didn't have holes quite big enough, but a quick go with the drill fixed that ;) Take it very slow, and work up through the bits until they are the right size. Don't try and go straight to the bigger size, or you might crack your bead.
Now, time to test the top. I used a coffee pod that fitted nicely on the rim, and put a hole in the middle for the skewer to go through. Choose the other sequence of beads, too. If the skewer is too long, it can be trimmed down later....
So, a quick paint job on the base and stem, and this is where I'm at: 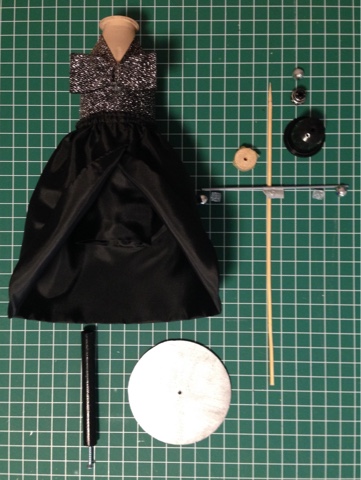 To stop the arms from shifting, I put some heavy duty woven sticky tape in the centre and put a hole big enough to fit the skewer. When the whole lot is assembled, the skewer will go through the hole and stop the side-to-side movement. I had to slightly enlarge one of the arm holes in order to get the extra bulk through, but its not noticeable...
So, we are now ready to assemble!
First, thread the arms through the sides. Roll the tape over itself and push through the hole, using the top to see down the bottle. If necessary, trim the tape to reduce the bulk. I found a light shining through the plastic helped a lot to help with finding the holes. Then thread the skewer up though the hole in the bottom, through the tape on the wire and out through the top, pointy side up. 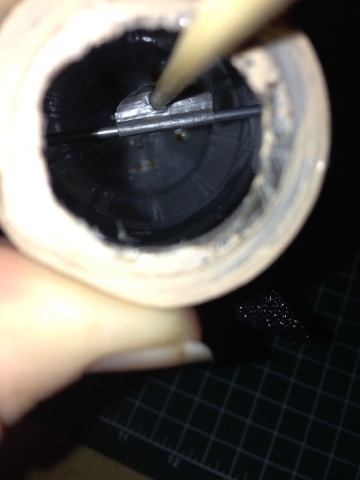 You can now glue the stopper into the neck of the bottle. It will bend the skewer slightly, but you can adjust the plug to fit in the best spot centrally. Often the skewer will not be totally straight, so you can manipulate it so the curve goes around the wire. 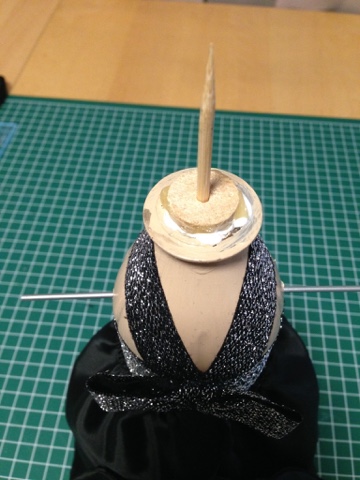 At this time you can trim the skewer so that it fits into the base, but leaves enough at the top for your chosen beads. If you want to leave the point, trim from the underside. I found the easiest way to do this was with the wire cutters. Trim gradually, testing in between so you don't cut too much off.
Thread up the pod and glue down. Add the remaining chosen top beads and glue in place.
With the base screwed together, glue the skewer into the dowel. Make sure there is plenty of glue around the hole in the bottle, to prevent it from being able to spin around, which could cause the skewer to snap and that would be a disaster!!
Glue the beads onto the arms, and you are DONE!!!! Phew..... 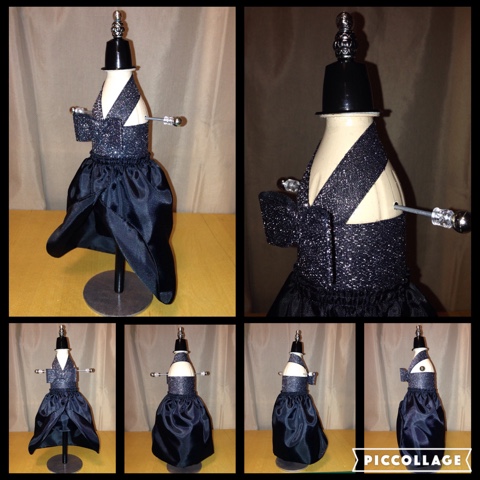 Posted by DanaStuff at 7:27 pm