Yes, I know! Christmas is over for another year.... but I still have a bunch of scraps left over from my Christmas quilting, and they match so well I don't have to think about the prints, so can focus on the design!

I have seen a few quilting blocks on my Flipboard with white strips between random blocks (can't find any links at the moment, but will add when I can find it!) and have been racking my brain as to how they are done!! They appear so random, but somehow structured at the same time?? I have not been able to find any kind of tutorial, so trial and error was needed.

So, I tried PURE random, crazy quilt style, unsuccessfully. Then I tried paper piecing random, then cutting up and re-stitching in a different configuration, also unsuccessfully.

Firstly I cut a bunch of white strips. I have cut mine 2cm, but this is a bit narrow, so next time I will make them 3cm. I cut some paper squares, recycled from the old Yellow Pages (I saw this once, but having tried it, I think its a bit thin...) and then got my ruler and drew random cutting lines. I decided what angle the strips will go, having discovered that without a guide, 2 pieces can be the same way and a waste of effort. This way you are guaranteed connecting blocks of different angles.


So, once the pieces are cut apart, I just randomly pieced alternating print and white strip, making sure that the edges were always print. Then, I trimmed the pieces down to the paper edge and inserted the white strips between each block. Since my strips were quite narrow, the finished block size was almost the original size, however it was tight sewing between the paper sheets. I then trimmed the block down to square, in this case 6 1/2 inches (it is a doll quilt after all...).

I had planned to do 9 blocks, but I don't want to lose interest before its done, so I will only do 6, sash it with more white between and bordered, and then some kind of interesting quilting (probably meander quilting) and then binding.

I hope to have this done before the end of January, but its so hot here at the moment, it seems ironic to be ironing with the aircon on!

More info to come! Will also add more pics of during construction, as well as finding those links to the original inspiration pics. I know they are here somewhere!!!!!!

*UPDATE*
Found the name of the block that inspired me is called "Mod Mosaic" and there is a Tutorial here at Oh Fransson. The finished effect from Oh Fransson is more like the Ticker Tape style (which I have already tried and LOVE!!), however, mine is busier and I used foundation papers. I never seem to have much success when I do free form stuff, but I LOVE how this block works - however the effect is achieved!


There is no set rules when it comes to quilting these days, and there are soooo many creative quilters out there always developing new styles and designs. I am just a in awe of them all!!!!

Another girl gets some clothes...

Modified a pre-made dress for this "made in England" girl, and added some white pantaloons for modesty.... 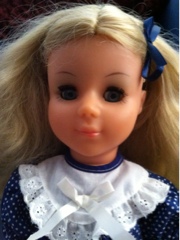 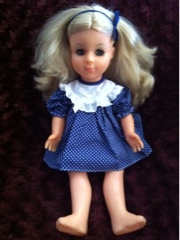 Posted by DanaStuff at 9:35 pm

Email ThisBlogThis!Share to TwitterShare to FacebookShare to Pinterest
Labels: Doll clothes, dress, made in England

My Cabbie has new pants....

I bought this CPK Jesmar many years ago, and regret not buying his sister....

He came with his original yellow jacket and shirt, but has been waiting on some bottoms. I had planned to do some jogging pants to match his jacket, but there is a bit of pilling and fading so the pants would have been soooooo fresh and clean it would have looked a bit odd.

I modified a Butterick pattern by adding some pockets (real, by the way..) narrowing the front and reducing the bulk in the back, as well as raising the crotch line. I added some details to the front, included a real jeans button and recycled an old pair of pre-loved jeans for the fabric.

Turned out ok, I think??

Posted by DanaStuff at 5:13 pm

Finding a whole bunch of interesting bits and pieces in my remnants box!

Time to try something else, although I feel remnants will still be involved somehow...... Curious???? 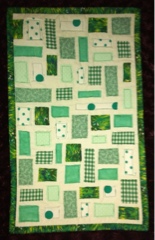 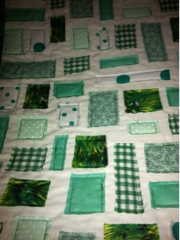 Posted by DanaStuff at 7:43 pm

Recycling at its best!!

The remnants from the last couple of doll dresses, plus a couple from my stash, all came together for this new little ticker tape doll quilt.

These are so easy and use up a bunch of scraps too big to throw away! 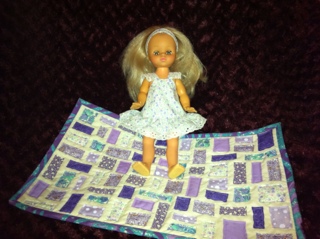 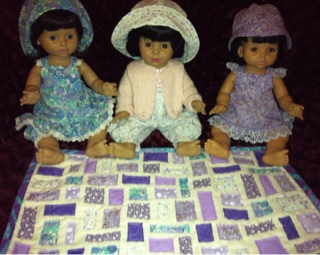 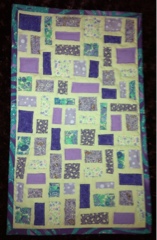 Posted by DanaStuff at 8:58 pm

So, on the point of finishing stuff, here is my first project...

All this one needed was some Velcro at the back. Why didn't I do this years ago?????? 5 minutes was all it took.

The doll is a Famosa baby doll, with a mechanism in the left arm that moves the head. As the hand is moved towards the mouth, the head moves as if to take a drink. Very cute!! 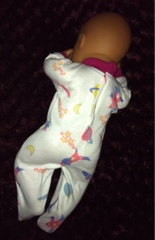 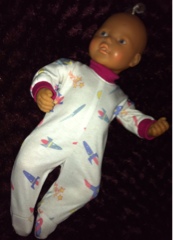 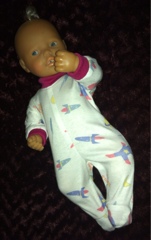 So, I didn't like that dress on Dee Dee, so I have put it on another doll. She is a Regal, from Canada, and is about 38cm tall.

I took in the waistband of the pants to fit, but the top fits great - no mods required! Obviously the hat was going to be waaayyyy too big, so I thought a simple headband would be better, since she has had a little bit of a haircut.

And voila!! Another one done and dusted!!! Hopefully she will find a new home soon....

Posted by DanaStuff at 9:05 am

This one is minus the lace on the straps and pants. Works ok.....

Still can't get that hat right! Tried a modified small size, but it's not quite fitting right...... Back to the drawing room..... At least the dress fits!!

Posted by DanaStuff at 8:55 am