I bought some more crochet doilies (commercially made, not family heirlooms) to do some more cushions. I still have some of the pink napkins, so I decided to use these up, plus cut some up (nooooo!!) to see what it looks like.
http://danaspageofstuff.blogspot.com.au/2016/01/cushion-finished-kinda.html
There were some that were the same design , plus a couple of random shapes, so I played around a bit until I found a layout that I liked. A Google search for lace doily cushions brought up a pic on denim, so I thought this would be an interesting combination, and I had some on hand.....
Once I decided the size for the cushions, off I went! 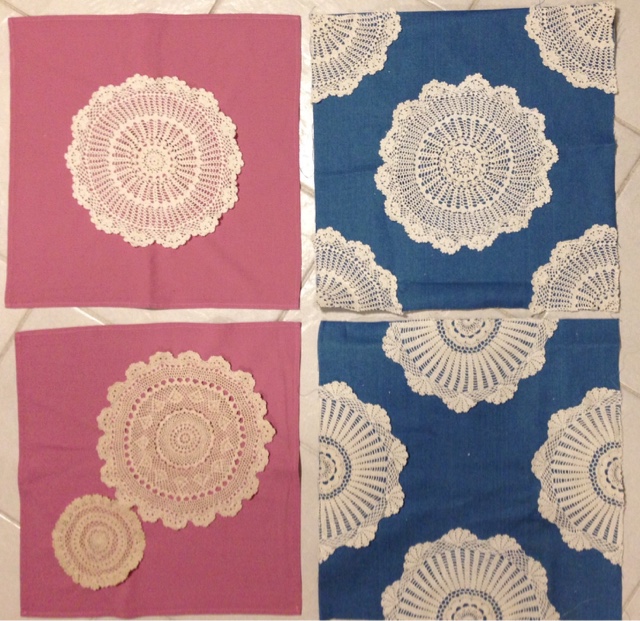 The doilies are attached with invisible thread in a large zigzag. I have left some of the edges free, some are stitched down.
With the blue, they are simply done using two doilies. One is cut into quarters, one has two cut in halves. I think they make an interesting design, don't you?
I will be using the invisible zips again on the pink ones, as I really liked the effect that it made.
So, after stitching up one if the blue versions, they ended up with really point corners, which I didn't like at all. I knew there was a trick to make them less prominent, so I made up a corner template, and used that to make the second. Unfortunately, the zip opening is quite small, but once the cushion is in there, it looks heaps better ;)
The denim ones are done - 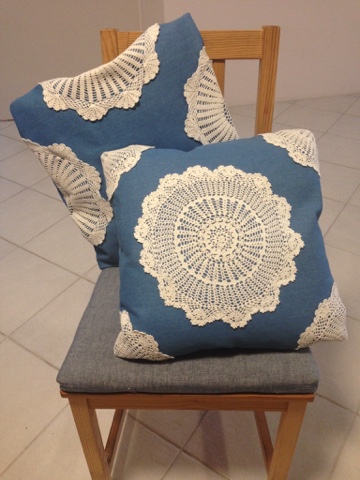 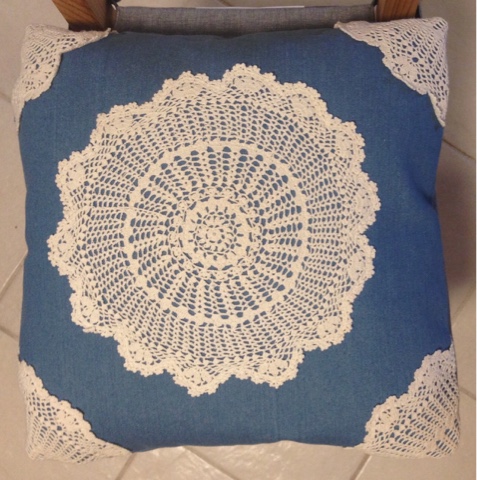 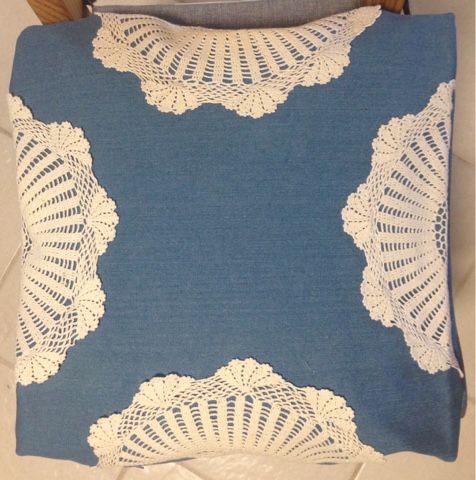 Pink ones are done now, too - 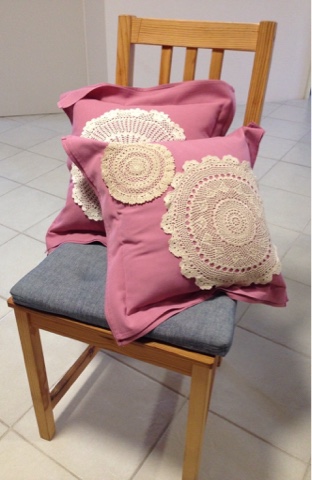 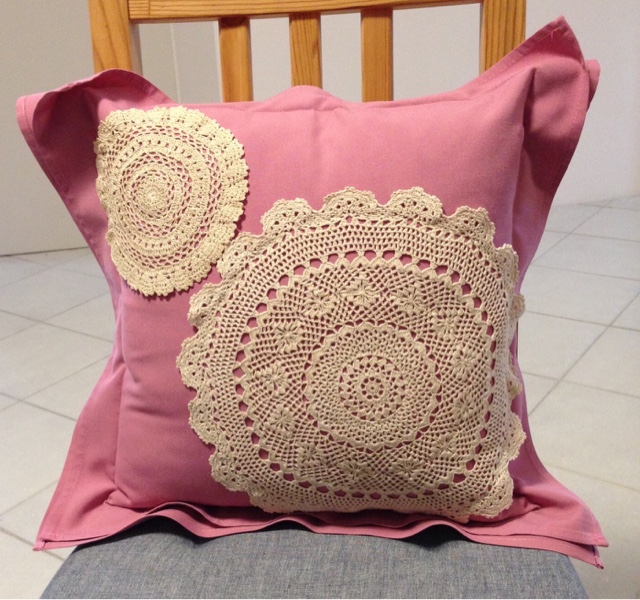 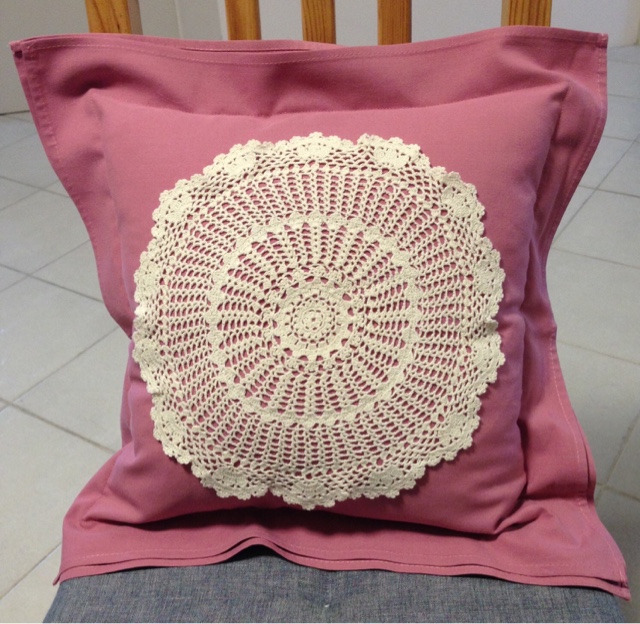 Posted by DanaStuff at 7:50 pm

Another finish, another bag!

Mums been doing some cleaning up, and found a fabric panel I had given her her to add a machine embroidered design to. Thing is, I have her machine here to play with, so it was passed back to me to finish.
Blogged back in October 2013 : http://danaspageofstuff.blogspot.com.au/2013/10/another-bag.html
Ages back I bought a bag of random scraps, and in amongst the pieces was this panel. It looks like it was going to be a cot bumper or something like that? Anyway, I thought it was missing something, so after looking through the book that came with the machine, I found a hot air balloon that might work.
After doing a sample, I went ahead with the real thing! Turned out a little tight, but worked out ok...
I remember, at the time, buying some (what I thought was) matching fabric, but, looking with fresh eyes it was not close enough to be passable. So it needed to be contrast instead.
I also added some sequins to the trees to liven them up a bit. I had thought about beads, but they were too intrusive, and we're catching on everything, so sequins were the next best thing. 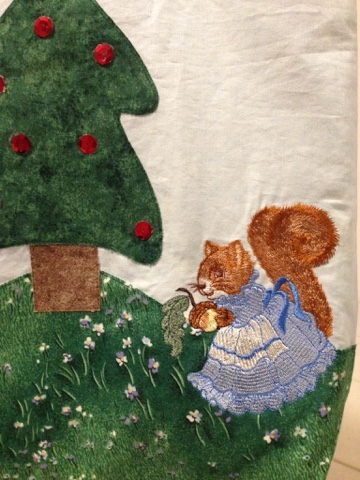 This is what I ended up with in the end: 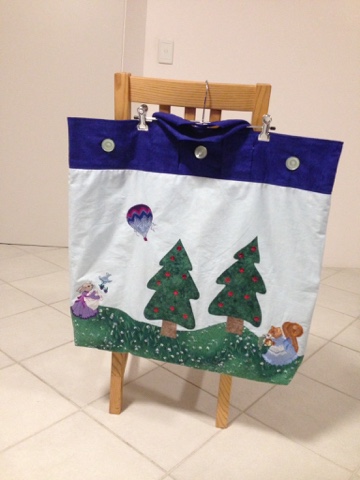 It's heaps bigger than I was expecting! I decided to line it to give it some body, but found that the sides kept collapsing, so I decided to add some buttons at hold it together. Probably should have put some stabiliser into the navy top panel, as it's pretty soft, but it will make a good beach bag or similar. ;) 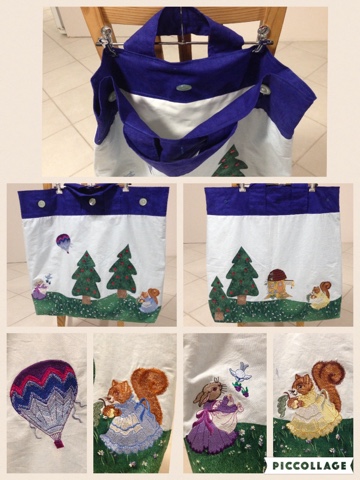 Posted by DanaStuff at 9:58 pm