So, the Canning Show is over for another year, prizes are awarded, presentations done....

Not too thrilled with my entries this year. Only one was planned, one was already half done, two were from last year that didn't receive prizes, and the last one was soooo rushed, I am also ashamed that I put it in at all....

Lets start from the top!!

FIRST PRIZE
I had already made the dress for the Angel doll years ago, including the shoes, it just needed finishing! I made some underwear, added the wings and voila! Prize winning Dressed Doll.

SECOND PRIZE
I made this pink apron for last years show, but there was no category that fitted, so no prize. It is fussy cut shoes ironed on, and quilted.

THIRD PRIZE
Same as the pink one, the green apron was already done for last year. Fussy cut flowers, sil leaves and the vase is a pocket. All my own design! Not big on practicality, but visually, not too bad. It WAS ironed when it went in, not that it looks like it now!

OTHER ENTRIES
The Foster Child was made, but the clothes were very rushed! Not my best work. Almost too embarrassed to put in, but thought what the heck?? I paid my entry fee!! There were some gorgeous entries up against it, so no surprise that there was no prize. (I'm a poet and didn't know it! LOL!!)

The Christmas Star mini quilt was out-gunned by a much bigger quilt, and the Apple Tree wall hanging was also not up to the standard of the others. A comment attached said it needed more quilting, but I followed a pattern! Maybe I will add some for next year? I'm already 2 up!!

Every year, mum and I say the ribbon is ours, but every year we leave it too late! One project per month equal 12 entries - in theory....... My problem is motivation and inspiration. I never seem to have both at the same time! The hardest part is starting....... 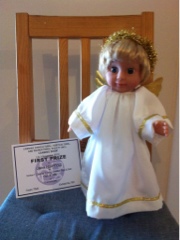 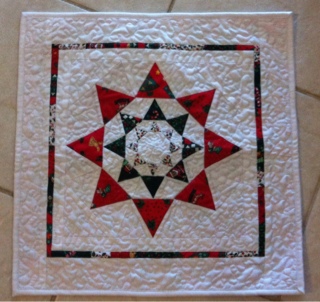 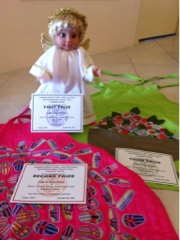 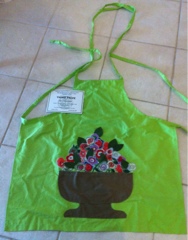 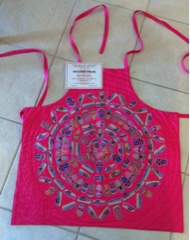 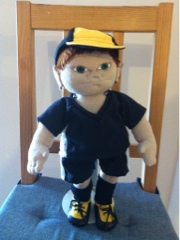 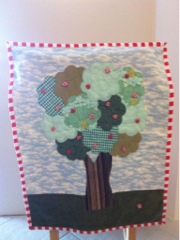 Posted by DanaStuff at 4:18 pm